Posted on February 11, 2012 by omahapizzareview

UPDATE: Roma’s Pizza has been closed.

Roma’s Pizza and Subs is located in the old Don Carmelo’s spot in a little strip mall just north of West Center Road.

It’s a decent sized place with around 9 booths for dining. They have a self-serve soda fountain as well as 5 beers on tap. I recommend a Peroni. There are also a few flat screen TVs on the wall for your viewing pleasure. The small kitchen features an old Vulcan deck oven.

We grabbed an order form and took a seat. Their menu features apps, pizza, subs, salads, and soups. They even have a kid’s menu. There are no specialty pizzas here. You build your own by ticking the box next to the toppings you’d like. Extra toppings are very reasonably priced at Roma’s. I like the idea of the simple order form, but it doesn’t work so well if you’re ordering more than one pizza. You really have to use another form for each pizza. We decided on the fried ravioli with marinara sauce for our appetizer, a veggie pizza with spinach, onions, mushrooms and tomatoes, and a sausage and pepperoni pizza.

The fried ravioli arrived quickly and piping hot! Be careful on that first taste, as they were burn-your-face-off hot! They are served with a bowl of marinara for dipping. The beef filled ravioli were pretty good, but the standout here is the marinara. Very tasty indeed. We think they use the same sauce on their pizza as well.

Our pizzas arrived with perfect timing as we had just finished our ravioli. They were served on a standard silver pizza tray. The crust at Roma’s is a very, very thin. I’ll be the first to tell you that I enjoy a thin crust, but I must admit that we were not big fans of the crust here. I’m a real New York style crust kinda of guy. Thin, but not this thin, with a slightly puffy and chewy outer rim. Roma’s crust was super thin with a hard outer edge. I felt the crust was the only disappointment; the rest of the pizza deserves high marks.

The veggie pizza my wife enjoyed was outstanding. After her first bite she whispered, “This is my favorite so far.” The spinach seemed to be sauteed or steamed and was placed directly on top of the sauce. It was then covered with loads of gooey cheese, as well as red onion, fresh mushrooms, and diced tomatoes. We think adding the veggies on top of the cheese was a wise choice as it seemed to prevent the crust from getting soggy, which happens often with vegetarian pizzas. My better half agreed that the crust was a bit too thin for her liking, but the sauce, crunchy crust, and self-selected vegetables made it her favorite by far. 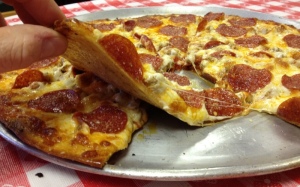 The sausage and pepperoni pizza I ordered had plenty of each topping and plenty of cheese. Most importantly, the pepperoni was on top of the pizza – the way God intended it.

Both pizzas had the  tasty marinara/pizza sauce with generous amounts of each selected topping. We felt Roma’s sauce added a perfect balance of sweet and spice to their pies.

Overall we thought the pizzas were quite good. Usually when you have a crust that you dislike, that ruins the whole pizza experience; it really is the most important part of the pie. At Roma’s, the quality and freshness of the toppings really helped overcome the disappointing crust.

How would you rate Roma’s Pizza and Subs? Click on the stars below!

This entry was posted in Pizza and tagged Roma's Pizza and Subs. Bookmark the permalink.