Posted on March 12, 2012 by omahapizzareview

Bernie’s Pizza Parlor has been located in old Millard since the 1970’s. In fact, I grew up playing baseball on the fields right behind Bernie’s and having ice cream at the Dairy Queen right across the street.

Many things have changed over the years, but Bernie’s is pretty much the same as it’s always been. I’m certain most everything inside Bernie’s is exactly the way it was the first day Bernie said, “Let’s do this!” and flipped the Open sign. In fact Bernie himself is still running the show. Yes, it’s pretty dated, but we came for the pizza. Onward…

We arrived around 5pm on a Friday night and pretty much had the place to ourselves. There were two tables reserved and two others occupied, so we found one near a window so we could actually see what were eating. It’s pretty dark in there!

We ordered some garlic cheese bread, a veggie pizza, and a sausage and pepperoni pizza. The menu even features a 7″ “Dwarf” sized pizza which made us chuckle.

The garlic cheese bread arrived fairly quickly and was presented on, wait for it, a stylish paper plate. Old school. The bread was sliced thick and had nice, light garlic flavor to it; nothing overpowering. It would have been better if it had some marinara for dipping, however. 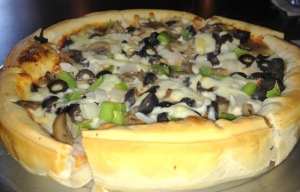 Our pizzas arrived a bit later and were served on the standard silver pizza tray. Styrofoam plates are brought with the pies. I get the feeling they don’t like to do too many dishes here! Bernie produces a medium to thick crust. The edges are quite high. It reminded me a bit of Godfather’s Pizza crust. Bernie’s crust is very light in color with no browning on the bottom even though they are cooked in Vulcan deck ovens (they have two Vulcan deck ovens; one is the original single deck and the other is a ‘newer’ double deck oven). Even though the crust is thick, it’s surprisingly light and airy, and almost had a snap when taking a bite.

The sauce here is good. It’s sweet and flavorful, but there sure isn’t much of it. They are pretty stingy on the amount of sauce they use on the pies. I don’t like my pizza swimming in sauce, but a little more would have been welcome.

The veggie pizza was a traditional veggie pie with onion, green bell pepper, loads of black olives, and canned mushrooms. There wasn’t anything that made Bernie’s pie stand heads and shoulders above the rest, but the Pizza Wife really enjoyed it. Part of that may have had to do with the fact she knocked back two beers with dinner. 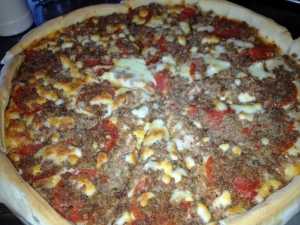 The pepperoni and sausage pizza was pretty tasty. There were plenty of pepperoni and the sausage was quite good as well. Very small bits of ground sausage covered the pizza. The cheese was used about as sparingly as the sauce, but both under and on top of the toppings which was an interesting touch. There just wasn’t much of it on either pizza, which was a bit of a bummer.

It had been nearly 20 years since my last visit to Bernie’s and to be honest, I wasn’t even sure they were still in business. I’m sure the thousands of cars that pass by on Q street every day wonder the same thing from time to time as there never looks to be much going on there. I’m glad we stopped in and I’m pleased to say that Bernie is still cranking out the pies!

The Good: Bernie is still kicking it old school producing pretty good pizza
The Bad: A little stingy with the sauce and cheese

Oven: Deck oven
Crust: Thick and airy
Sauce: Sweet but used sparingly
Cheese: Over and under toppings, just not much of it

How would you rate Bernie’s Pizza? Click on the stars below!

This entry was posted in Pizza and tagged Bernie's Pizza Parlor. Bookmark the permalink.